A sampling crew led by Ray Hozalski and Paul Bloom of the University of Minnesota and Mike Perdue of Ball State University was at the Suwannee River field site in the Okefenokee National Wildlife Refuge (ONWR) in southeastern Georgia for about 4 weeks in 2016. The worked from mid-May to mid-June of and extracted dissolved organic matter from approximately 18,700 liters of water with an average DOC concentration of 49.1 mg/L. They returned to the laboratory at the University of Minnesota with 838.8 g as C of concentrated humic substances for an intermediate recovery of 91%. In the lab they separated HA from FA and desalted the concentrates. The HA and FA concentrates were taken to a commercial freeze-drying facility for collection of the solid products.  Final yield after freeze drying was 241 g of HA and 937 g of FA.

The sampling site is at the outflow of the river from the Okefenokee Swamp. It is a remarkable, nearly pristine blackwater ecosystem where the water pH is often below 3.5 and the concentration of DOM is more than an order of magnitude greater than in the world-average river. It is mainly because of the relatively minimal human impact and very high concentration of dissolved organic matter that the headwaters of the Suwannee River was selected more than thirty five years ago as the location from which samples of natural organic matter would be isolated for the standard and reference collection of the IHSS. Over the years, ten standard and reference samples have been collected there and distributed to hundreds of scientists throughout the world for their research and for inter-laboratory comparisons of research methodologies.

A 13-minute video about the sampling and processing of the HA and FA  is available on YouTube. 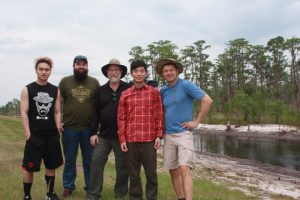 Photo from the 2016 expedition showing some of the crew members and the Suwannee River in the background.

You can find out more about which cookies we are using or switch them off in settings.

This website uses cookies so that we can provide you with the best user experience possible. Cookie information is stored in your browser and performs functions such as recognising you when you return to our website and helping our team to understand which sections of the website you find most interesting and useful.

You can adjust all of your cookie settings by navigating the tabs on the left hand side.

Strictly Necessary Cookie should be enabled at all times so that we can save your preferences for cookie settings.

If you disable this cookie, we will not be able to save your preferences. This means that every time you visit this website you will need to enable or disable cookies again.